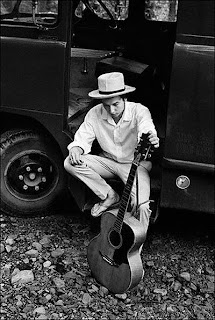 Yesterday was Bob Dylan's 69th birthday, so I'm in the mood to try to put down in words why I love his music so much. I've often struggled with how to introduce people to his music, because in some ways he's very much an acquired taste, so this will be my attempt to convince you of his glory.

First, which Dylan to introduce? One of the reasons he is so great and so legendary and so enduring is that he is always shapeshifting. He started out covering folk songs and writing protest songs, then quickly was branded a sell-out as he moved into poppier and lighter stuff and then on to out and out rock & roll--and that's only his first four years! He's done psychedelic, Christian, jazzy, bluesy, country, boogie-woogie, modern, and even crappy music in the years since. I love how many styles he explores and makes his own. I've concentrated mostly on his 60's music here, since that is his best, in my opinion, and like I said can already give you a good sampling of his stuff.

Rather than go on talking about him or his lengthy career, I'll introduce him by sharing a few of his songs that I've been loving recently. If you'd like to listen along, here's the Grooveshark widget that will let you!


Chimes of Freedom - One of Dylan's less overt protest songs. A memory of watching a downpour from shelter is turned into a vision of the "countless confused, accused, misused, strung-out ones an’ worse" where lightning--the chimes of freedom--drowns out the chimes of wedding bells. This song is for everyone who has ever felt compassion for "the mistreated, mateless mother, the mistitled prostitute" or wished there were bells "Tolling for the rebel, tolling for the rake / Tolling for the luckless, the abandoned an’ forsaked / Tolling for the outcast, burnin’ constantly at stake." Bob Dylan (and God!) remembers them, and both want us to do the same.
Most of the Time - The perfect evocation of a relationship that ended a long time ago but that still brings a smile to your face (and a twinge to your heart) every now and then, that you've gotten over except when that one thing reminds you of her, that was so good and so close. It's powerful and pathetic. My favorite verse:

For more songs along these lines, check out most of his album "Blood on the Tracks." For an amazing nostalgic look back at strong but equally lost platonic relationships, listen to "Bob Dylan's Dream."

A Hard Rain's A-Gonna Fall - An apocalyptic masterpiece with imagery that blows my mind every time. Traveling through a ruined world and describing it in a way that's a cross between Isaiah, Eliot, and Ginsberg. Prophecy of and memorial to the tragedies of the 20th century and humanity in every time. The format of speaking to his "blue-eyed son" reminds me of God's statement that the earth will be smitten with a curse if the hearts of the fathers aren't turned to the children and vice versa. The last verse, laying out his plan to fight back against the despair in some way, to be a witness and a voice to the injustices despite the fact that he knows he'll just sink into the sea, is real to me.

The Gates of Eden - This song just brings so many thoughts to my head every time I listen to it, and they're never the same twice. This time, my thoughts are that it is an indictment of everything, of every plan to recreate the paradise we've allegedly lost, of demagogues who promise prosperity, of greed, of phony philosophies, of our high opinions of ourselves. Listen on to the next song on this album, "It's Alright, Ma (I'm Only Bleeding)," for an equally incriminating sequel.

Every Grain of Sand - Bob Dylan described this song as a revelation, and I have to agree. This song represents the atonement--and faith in an all-powerful Savior--so well for me. Sin is real and choking, storms rage, innocent faces are ground down, temptation's angry and personalized flame never goes out, but through it all there's an undertone of salvation. At the worst moments something divine springs up within, a spark of love and redemption, an invincible testimony of an eternal perspective. God sees and knows and brings us back.

Desolation Row - No one can begin to explain this song adequately. Epic is a good word to start with (it is over 11 minutes long, after all). It sprawls across literary and cultural icons of the last few thousand years (into which Dylan--oh so humbly!--inserts himself in the last verse), tying them all together into an enigmatic narrative set in and near desolation row. The words stay with me; just recently I heard a virtuoso violinist performing a modern composition in the Kennedy Center playing an electric violin, and I couldn't help but think of Einstein thanks to this unforgettable song. You can think of this song as describing hell (or maybe something more akin to the Elysian Fields) or an elaborate critique of modern culture (the "agents and superhuman crew" have been interpreted as J. Edgar Hoover's overzealous and paranoid FBI agency) or another apocalyptic addition to the Dylan canon. I think of it as one of the best poems I've ever heard sung. And oh man, the harmonica! How can you not love it?

Some honorable mentions: Visions of Johanna, Ring them Bells, Stuck Inside of Mobile with the Memphis Blues Again, Like a Rolling Stone, All Along the Watchtower, My Back Pages, Tombstone Blues, and dozens of others. But this has gone on long enough already, hasn't it?

The point is, Bob Dylan belongs among the most fun and engaging musicians and artists of all time. And now you know him! Happy birthday, Bob!

[picture courtesy of the awesome blog The Impossible Cool--check out their Malcolm X from a few days ago too!]
Posted by austin at 18:59